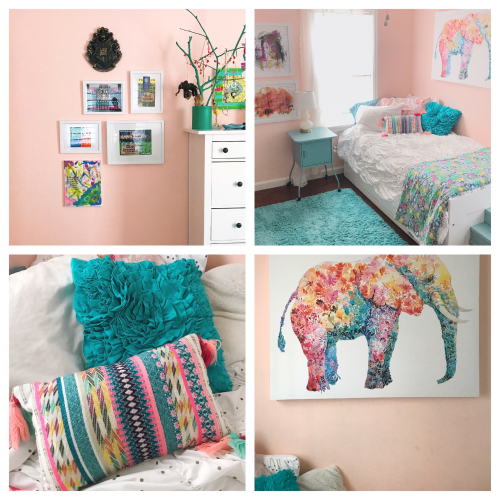 I mean it. She dumped all of her camp stuff, took a shower, climbed into bed and the room hasn't looked the same in 365 days.

But she went to camp again this summer. Which means I finally had a chance to take pics.

Sidenote: At one point, our house was home to a family of boys. This I know because neighbors have been kind enough to regale us with stories of the "House of Fitches," but I might have guessed anyway because nearly every surface of the second floor bedrooms and baths was covered in this special tannish brown almond trim. One bedroom even had semi gloss brownish walls. I am still undoing this ugliness, and it's slowly getting better. Awesome cool old houses with lots of poorly painted trim can be lots of work. Let's just say it is a good thing I can find zen with a paintbrush in hand.

So, the makeover. It was crazy and fun and exhausting! A year later, she still loves it, so I'm pretty confident in sharing our success here on the blog. 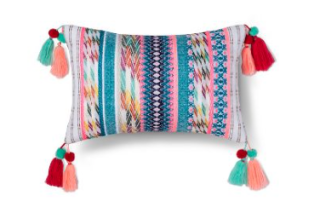 When I came across that pillow at Target last June (which I am still seeing in stores, but is no longer available online), I knew I was on the right track. She will say she doesn't care for pink, but she is a teal/aqua/bright CORAL fan. So hello, cute-little-global-and-not-at-all-girly-pillow inspo piece. Brought it home, got the nod. Sent her to camp. 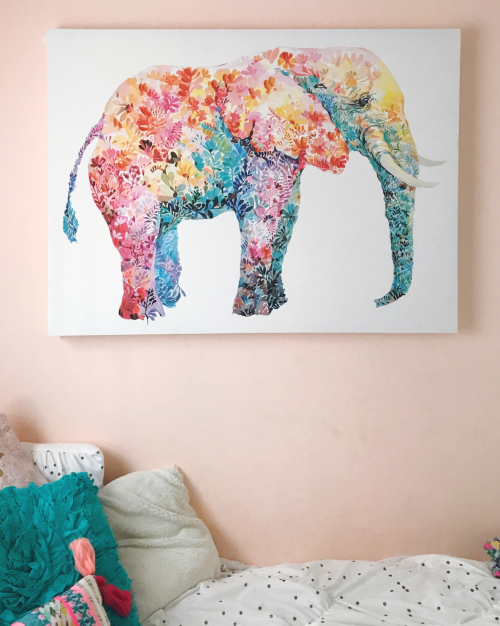 This one has loved elephants ever since her first trip to the zoo at two and has collected them ever since. So elephants, yeah. I knew I was going to have to incorporate them somehow. AND THEN I FOUND THAT ELEPHANT CANVAS AND THERE WAS A CHOIR OF ANGELS AT WORLD MARKET AND BOOM, I had a visual focal piece.  (Now cheaper at Amazon) 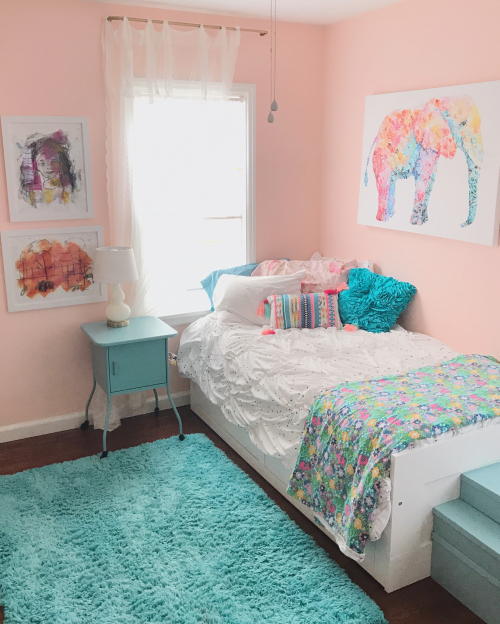 Let's also go on record and say this room is NOT PINK.  These walls definitely fall into the coral department, even if the color is officially called "Pink Bliss." (Benjamin Moore) 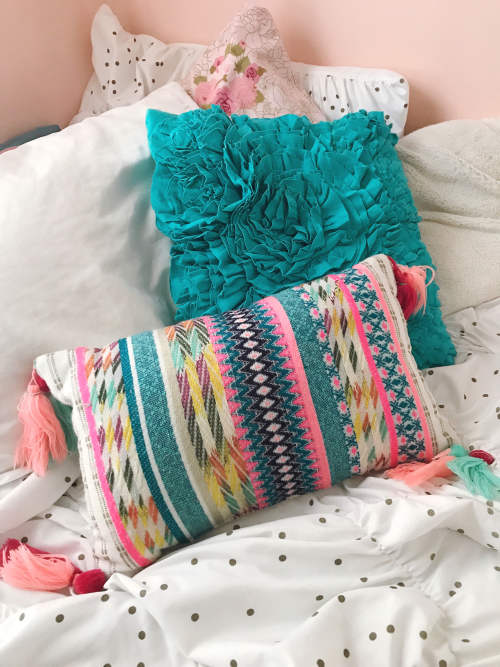 Most of the bedding is from Target as well, except for some vintage pillowcases I throw in there to mix things up sometimes.  The bed, dresser, side table, bookcase and desk are all from Ikea. Bless that store. 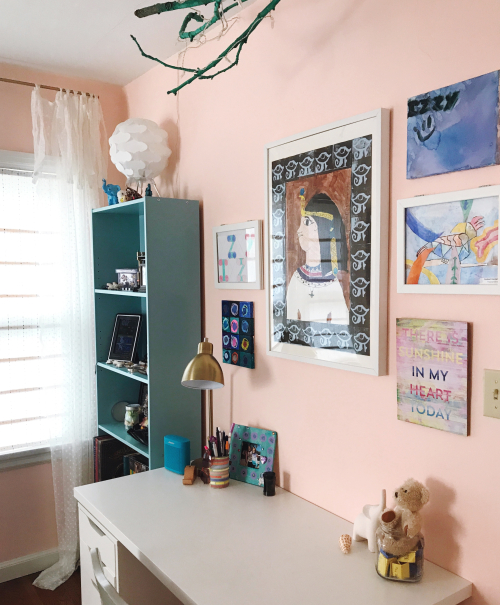 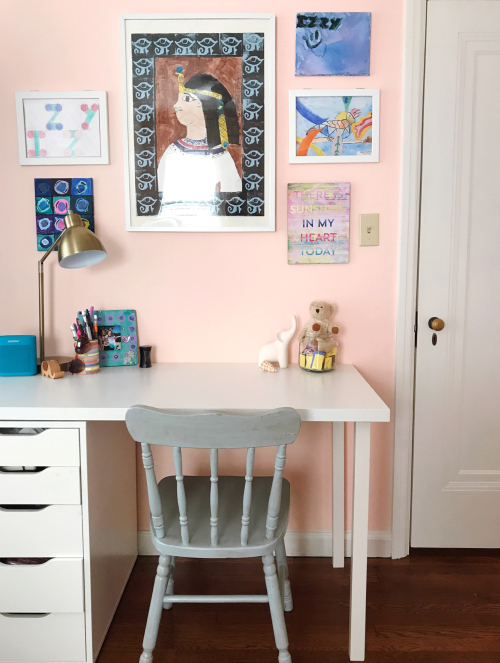 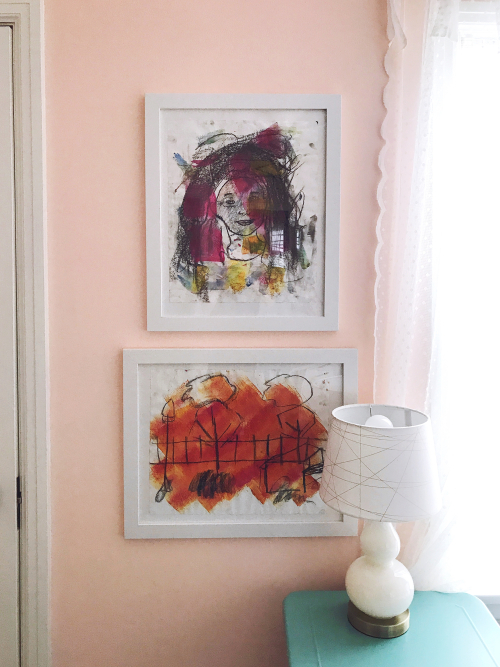 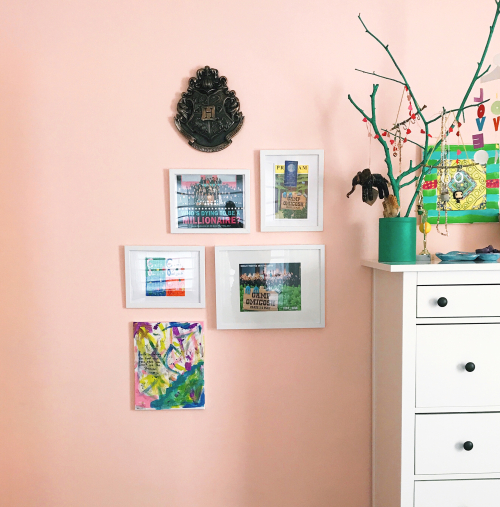 (What to do, what to do, what to do with kid art and momentos? Gah, there is so much. I'm trying to frame our favorites and have my girls participate in that process. Purchasing tons of frames and hoping for the best is my only strategy. And as much as I have installed in her room, there are piles in our guest room still waiting for their fate of some kind. Portfolios? Flat Boxes? Ceiling galleries? Will keep you posted on that project.) 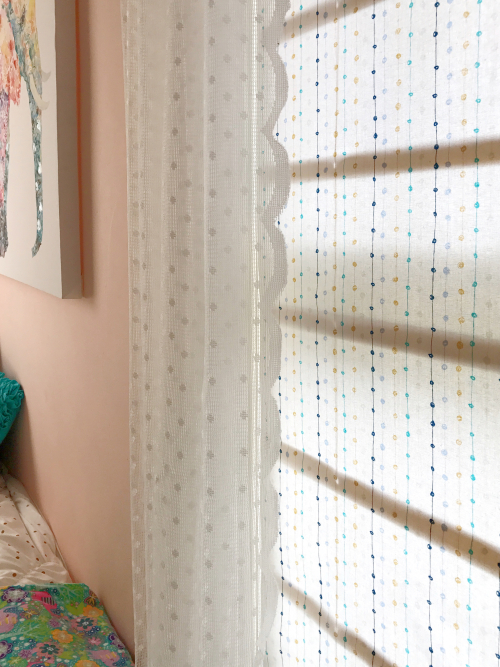 Obviously, we have a Dot Thing going as well. The dotted, scalloped sheers were purchased at Amazon, and I made the roman shades by following one of the many tutorials on pinterest, using the hardware from inexpensive mini blinds. They are actually lined, and the brightness here speaks to how much light her room gets! If there is one thing I would do differently in the room, I would have used a slightly thicker lining.

Other than that, her room is one of my favorites. :) And if she's happy, I'm thrilled. BTW, the Hogwarts crest we picked up on spring break at Universal this year? Pretty cool, actually. I just added it to her wall, using an old trick to hang it even and properly on the first go.  I shared that trick last week on my instagram stories, but I will share again in another post! It's life-changing and ever so handy. You will be able to hang with confidence!  I promise.

PS: I totally forgot there were even more reasons this is the Elephant Room. It would be a bit much if I shared her entire collection, but worth noting are: 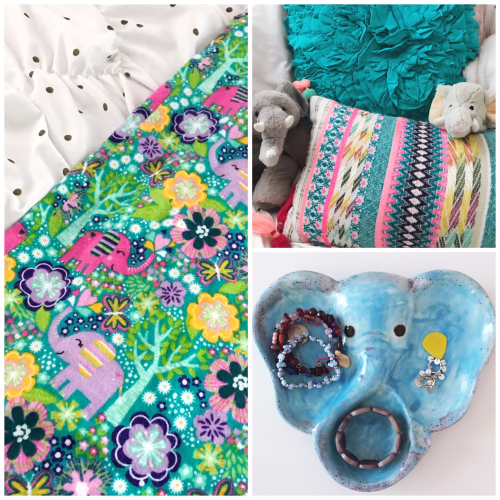 I LOVE the artwork next to her bedside table. Like I wish I could make something that cool!