{ thrifted + modified } The Pile and The Boots

So, part of my Need to Clean and Purge includes attacking the pile of mending and alterations that has been collecting in my studio.  It's not going anywhere if I don't address it, right?

And it's largely stuff for me, which is fun.

Case in point, this pretty little vintage skirt. (The sweater is vintage + thrifted, too.  However, the sleeve cuffs were too tight.  I just snapped them off and now I can push the sleeves up.  Much better.)

I bought the skirt years ago for $8 and loved it, but rarely ever wore it because of the length.  It is A-line and cut on the bias, which are both universally flattering, even if you think oversized plaid isn't. But I totally had this Librarian thing going on.

I meant the matronly shhh-ing types.

I just insulted them again.

I hope you know what I mean.

It just wasn't working for me.

So, scissors, thread and about 25 minutes later.... 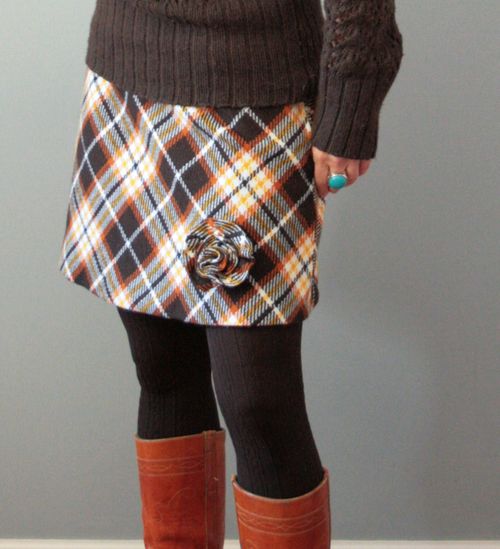 I cut off about 6", hemmed it by hand -- such a nice touch on garments, don't you think? -- and used some of the extra fabric to make a detachable flower.  I would never dare to wear this length without tights or leggings, but it's an acrylic woolish blend that needs leg wear anyway. 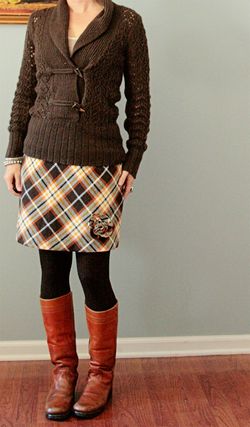 And now I love it.

And yes, those are The Boots I picked up in Seattle at a flea market.  Where Jade was holding them up for me across the store and I could swear there was a gentle glow and a choir of angels.  I had been looking for vintage Frye Campus Boots for two years. 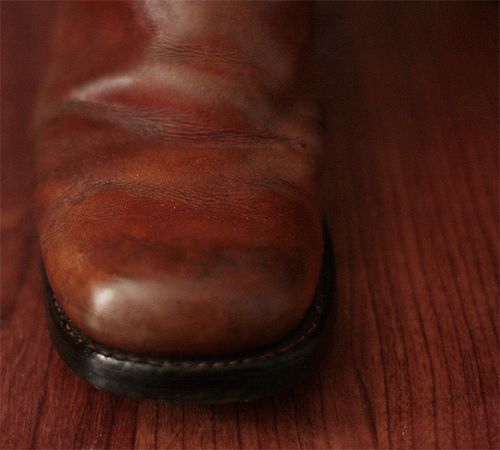 And there they were.  I quickly discarded the stack of olive green Texas-Ware I had been admiring and ran across the store in that underwater kind of haze you have in dream sequences. 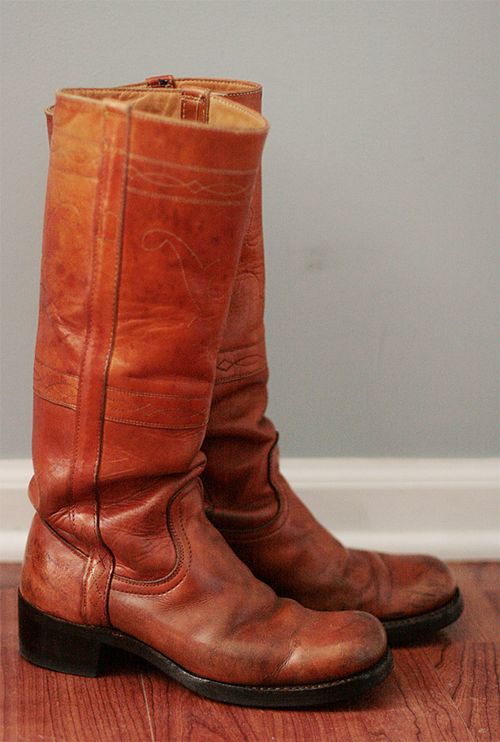 And as I got there I saw that, yes, they were exactly what I had been searching for.

I'm not going to lie.  It's ridiculous to get this excited about boots.  And I'm pretty sure there is a Peter Cetera song that would aptly describe my joy at that moment.  It was kismet, me and my found boots.  All worn in and aged.  Scuffed and softened and teeming with character. 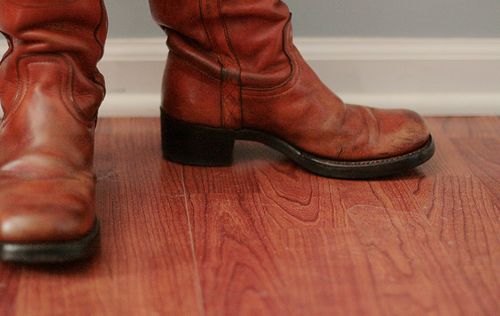 I took them home and after a trip to the cobbler for new soles and a cleanup they are thrilled to be back in action.  (If that is what you call the grocery store, library and dance class. )

And all we lived happily ever after.

Next up: Dottie'd up funeral wear.  Happy weekending!

your cobbler did a great job - they look awesome! And now I want a short plaid skirt :)

Grace, thats what it is! A Love Story. I hope Im not a giant relationship idiot!

I love the whole package, tights, perfect sweater, skirt, boots! I long for those outfits on a cool fall day. Bravo Sista!

I want that skirt! And those boots! Well, the whole outfit would be great, actually. Nice job!

She probably loves these boots more than me. Not kidding.

Oh honey. Im quite sure there was a dream sequence when I met you again for the first time. Yours is a Barry Manilow.

I think I HAD those boots, mine were new from the store-
circa somewhere around 1979-ish.....!! I no longer have them. They wouldn't fit anyhow, my feet are bigger now! ha! They look real cute on you!

You're killing me with the fabulous outfit and boots. But you know that. I'm glad your first wearing of them didn't give you hepatitis after all. ;)

I just saw a skirt like this in our thrift store. Should have bought it! Love the boots! What a find!

Yep, I did. I wore them with jeans tucked inside!

and yes....she was even more adorable in person, the pics just don't quite do this little outfit justice!!

love the boot story and that skirt! so cute, chris.

I'm inspired to go thrifting for a wool skirt now. Thanks!

gorgeous boots - what a lucky find. i am a big frye fan myself. also, great work on the skirt, your whole outfit is perfect for fall!

That's a really hot outfit...I would felt the same about the boots. I love them!!!

You performed magic on that skirt - making me want to chop up all the unflattering items in my wardrobe!

I love what you've done with the skirt! And the boots are an amazing find. Well done. :)

I love vintage plaids and that shortened skirt looks awesome.

and the boots? good find...and in your size? yes, the angels were with you!

I don't know what I like better, the boots or your great story about the find itself! Love your post!

The boots are fabulous!! Lucky you... and great job on the skirt - sassy!

The boots! OH the boots.

Fryes, secondhand? What are you, some sort of Thrifting Freak of Nature?! That is so not even right! I am so jealous!

Thanks for sharing your story about the boots and the skirt. Love them both. I too have a pile of things for me that need revamping! Great site.