About two years ago, I asked my ever-so-patient mother in law to teach me how to crochet, with the delusion of making my own ripple quilt.  I would throw it over my sofa and my children would snuggle under it.  I would use it to keep warm while I read.  The candy colors would be ageless and my girls would fight over who got to keep it someday.  Ever the enthusiastic pupil, I ran out and bought a LOT of yarn.

I did not count on two things.

And it is ok.  Now I can just appreciate the work of others and get on with my own stuff.  However, I still have a lot of yarn at my house. It's so pretty and soft. I like to look at it and imagine someday I will make something with it.  So it struck me as funny when I went out last week and bought yet ANOTHER skein of yarn with no plans of weaving it into something useful.

Instead, this is what Fidge and I did today while the littlest girl was napping (it is happening these days!  finally!!!) and it kept our fingers busy for about 20 minutes. 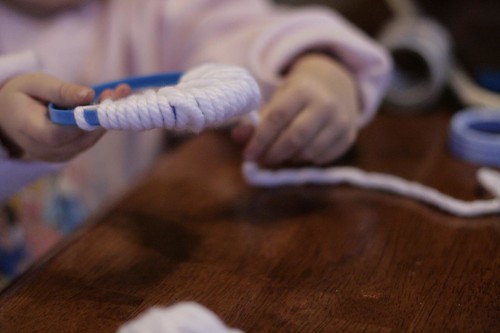 We used discarded plastic 32-oz to-go cup lids and cut circles out of the middle.  (It's easy to do if you use the straw hole to start your cutting.)  Then we wrapped some extra thick yarn around and around to create a wintery wreath.  This wrapping part kept her almost-four year old fingers busy for a while, which is always nice.

Fidget's is not done, or so she says.  She has started putting sequins on it, and we know how long that can take. 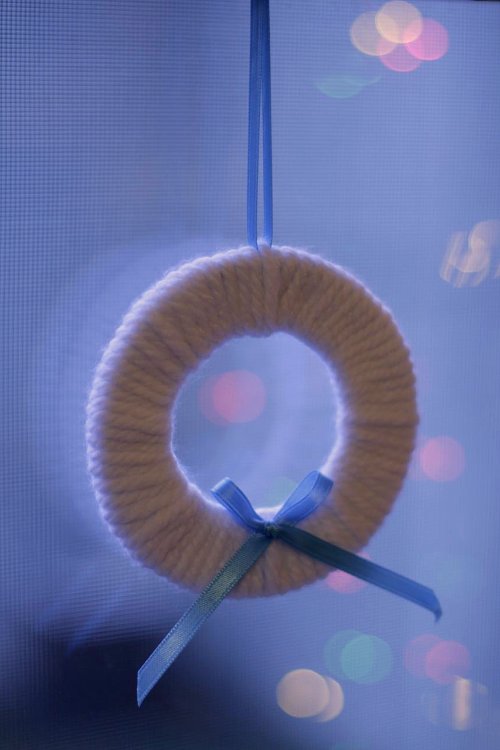 It reminds me of the kind of country-craft that I would have done back in second grade in the late 70s and am still taking out of my ornament boxes every year.  However, the fun thing about having small kids in the house is that you don't have to explain the prominent display of cutesy art projects.  Even if you made them.  Am I right??  :)

Next up, pom-poms and braided barrettes.  I'm kidding.  Sorta.

I had to go back and look through your archives at that crochet attempt. And it made me happy to think that I have known you for over two years as well. :)

Enjoy your snow day. Maybe Fidge can finish up with those sequins.

Amen to not having to explain the crafty ornaments. We have salt dough sculptures and juice can lids from our own childhoods on our tree. I love them!

I needed this post two weeks ago! I'm the art mom for my son's 2nd grade class and I was trying really hard to think of something fun, original and keepable for the class to make for their parents for Christmas. This would've been perfect! It's the kind of ornaments we still have from 2nd grade! I'll definitely be making it with my own kids! Thanks for sharing!

I can chain stitch with the best of them. It's too funny that just last week I chain stitched a whole skein of thick white yarn and wrapped it around a foam wreath...it is so cozy. Tell Fidget that I LOVE her version.

And little knot bracelets and friendship pins for your shoes. :)

Aww, that is so pretty! What a great ornament. I have grand plans to make a ripple blanket as well. If I don't finish it at least I can make lots of pretty ornaments! Thanks so much for this, I'll be linking.

Hey, I've been planning on attempting pom-poms with my kids ever since making my wee snowman...

I love this... I’m hoping you’ll share on Friday’s Nature Table. Pop on over to my blog to post a link.
Blessings and magic.
Donni