It's summertime and I don't really want to cook much.  However, the chorus of 'What's for dinner?' doesn't go on summer vacation.  I know spaghetti and salad isn't a major discovery, but I had to share my 'olive gardenesque' combo tonight.  It was fast and delicious.  (If only the stuff I slaved over got these kinds of rave reviews.)

So.  We did your basic spaghetti.  With jarred sauce.  I know, fancy.  Added some spices and some parmesan, but that was about it.   My eldest decided a few months ago to eat vegetarian, so we don't even add meat to the sauce anymore.

As for the salad, which is the whole point of this post... it was a bit more than that, but only a bit.  And there was no hot oven or stove involved, which is even better.  Because it's hot in the kitchen, baby.

I tore some romaine lettuce, added some parmesan and thinly sliced red onion.  (I can fully credit Olive Garden for my early acceptance of raw onions in a salad.  I know this for a fact.  I'm sure it was because those mandarin-sliced slivers of pink were swimming in the delicious dressing.  It would be a sin to leave them out of this salad.) 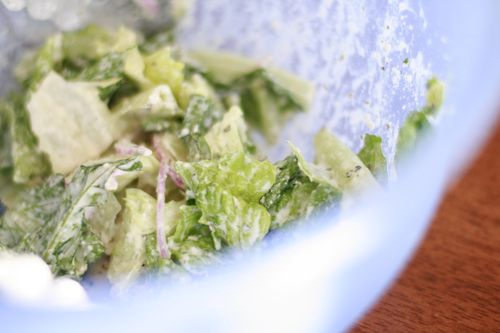 To the basic lettuce mix, I added a generous dose of salad dressing and tossed it well.  Croutons would have been a nice addition, but I didn't have any, and I didn't want to use the oven to make any. 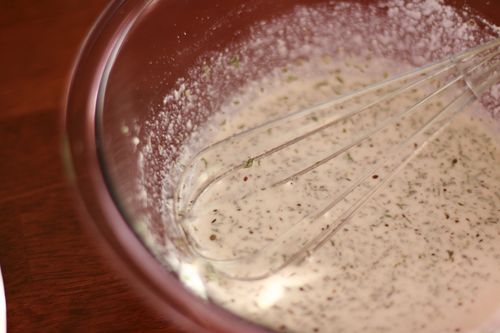 It's basically this recipe, and modified based on what I had on hand, as well as the fact that I get tired of measuring.  Let me tell you, it was gooooood.

Without further ado, here's a yummy dressing you should try.  (And nope, it's not in any way low-cal.)  It's not exactly OG's... but it was close enough for me to wish we had a server coming by with another bowl.

(By the way, I used a rather medium-ish bowl to mix this together. Because it makes quite a bit.  Enjoy!)

It does sound good. When I make spaghetti I use a jarred sauce too, the basic one, and then I add a can of diced tomatoes with the garlic and basil in them. It makes a big difference to the basic sauce. We really like it. (I do add ground beef to it too, but you wouldn't have to)mmmm, this is making me crave spaghetti and salad! I'm thinking tomorrow can't get here soon enough.

Thanks. It looks delicious.

oooo yummy. Spaghetti is my go-to dinner ALL the time. In fact I would eat it for most meals if I could (with plain old jarred sauce). But this salad puts it over the top. Thanks for posting the recipe!

You are too funny! That is my go to meal here at our house because Max loves spaghetti. Poor, Chloe, she is getting sick of it. I have been sorely lacking in any dinner mojo at all. I never know what to cook anymore. We been in a pizza, spaghetti, chicken rut. You are right though..what's for dinner, what's for dinner. Sherry

I will give this dressing a try. I'm always on the lookout for a good salad dressing.
Oh, and I do jarred pasta sauce all the time. I hardly ever make it from scratch anymore.

Mmmm. My mouth is already watering for my afternoon salad. I just "bought" romaine lettuce yesterday. (Except, I didn't actually buy it. I called and complained to the company of the bagged bug salad from last week and they sent me a ton of coupons for free salad!) I'm going to give your dressing a whirl.

Yummy! I'm getting tired of bottled dressings lately. I'll have to try this out!

yummy! I love as nice cold salad, especially with pasta!

I'm the same way when summer gets hot and sticky around here--the idea of turning on the oven or even standing over the grill is not appealing AT ALL! This dressing sounds delicious , i'm def. going to have to try it!

Had your salad dressing last night, loved it. My non-salad-eating 3yr old had 3bowls and wanted more...we cute her off, lol. Thanks for sharing!

i am allll about good meals without the hassle. nothin like kickin up a basic! well done my dear!

Sis I made a version of this after reading it. I totally did not have all the same ingredients, but mine turned really good also! I gave myself a high five!!!!

thanks for the dressing recipe! I just made it and it's delicious! perfect with the greens we just picked up from our CSA.