the one where she framed the records from her youth.

I had a lot of "Disney" records growing up.  (and one of those portable box record players, too, with the hinges and the microphone attachment?... how cool were they?)  My parents, clearly terrified of the wrath I would unleash if they ever discarded anything precious of mine, held on to these record albums.  I never knew what I'd do with them, but, darn it, I loved those records as a kid. 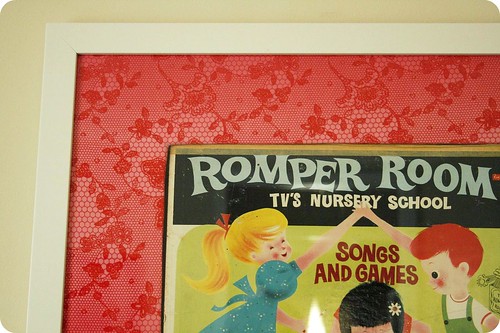 When we decided to bring the playroom upstairs (in December) from the basement to the 'office' in the front of the house, I was a little perplexed with how to decorate this room.  I mean, it's RIGHT THERE, at the front door, across from the dining room.

The walls had been painted a tasteful cream with faux satin stripe.  I had spent so much time on those darned office walls, there was no way I was painting over them.  But the new playroom didn't have much color.  We also had this huge space to fill over the piano.  The walls, already 9' high, looked even taller with a tray ceiling.  I really didn't know what to put in this very public, but also very playful space.

So... eventually*, I got to thinking about my old childhood records.  My parents were thrilled to unload some of my rather large stash of things-that-may-never-be-thrown-out-no-matter-what from their storage.  The album covers were just as cool as I'd remembered them.  The art is beautiful and Fidget recognized the characters and stories. The problem was, I didn't want to harm the albums in any way.  I also wanted wide colorful mattes for large frames, to help fill this space and infuse some color. 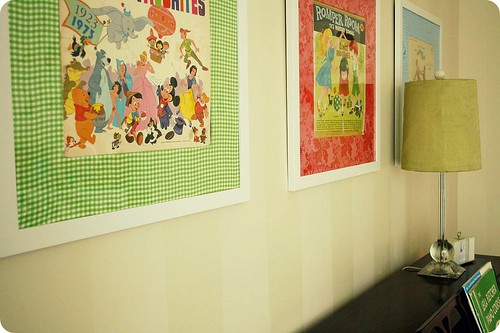 It dawned on me one night: foam core is about the same thickness and could hold the album covers in place.   And I could cover the mattes with stash fabric.  Of which I have plenty.  Ahem. 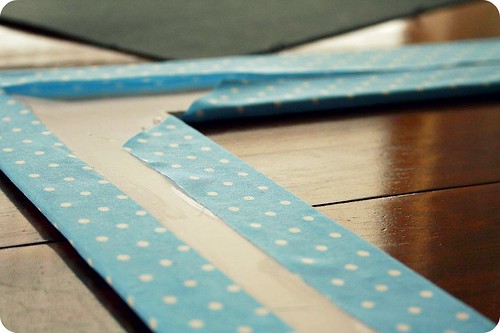 I ordered 19" square frames online for $18 each.  Shipping was a little pricey, but I was having a heck of a time finding oversized square frames in town.  In the end, these worked perfectly.  (although non-glare glass would have been nice, now that I see the photos...) 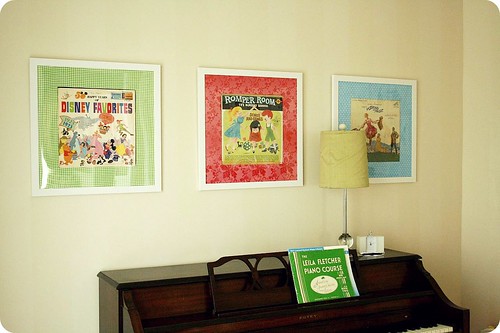 The albums are just sandwiched in the mattes, without any adhesive to mar the album covers, which is nice because we can also swap them out with others if we get bored.  I do have a collection of about 15 or so, but I thought these were a good start.

There is more craftiness underway... and a little Easter dress that is nearly complete.  Can't wait to share.  Happy April, everyone

{ I just remembered how and when I might have been inspired... Back in November, Julie @ Jane's Apron posted about vintage album covers, adding grommets and ribbons for instant wall-art.  Whew!  I knew it started somewhere... because I'm not really this clever on my own.  xo }

Hi Chris!
You have done the right choice with your album covers: they look nice in that way! :-)
I have many childhood LP covers too: it's fun to hear them again after so many time!!

I can't wait to see the easter dress... It seems to be gorgeous!!

That...is...the...cutest...darn...thing! I love that idea. See, maybe the tons of crap in my attic that I'm saving just in case a kid of mine should want it one day is a good thing! :O)

hmmm, I just read my comment - I didn't mean your albums where crap! LOL I meant the stuff in my attic is...ah, dear understanding friend Chris. :O)

How is it working having the playroom there? Ours in the basement right now and it sees very little action.

Those look great! Looking forward to the Easter dress.....I know it will be so darling! Your such a talented friend! xo

I went to Micheal's this weekend to buy their scrapbook/lp frames (that is what they sell them as) to do this same thing! But, when I got home, the album didn't even fit in the frame. I am so annoyed. I took the plastic off and everything. They better refund my money! Boo.

What a fabulous idea - definitely one to bear in mind for decorating the craft room this summer! Love this blog, inspirational

ah! what a cute idea!

I love them. Really, really love them...the graphics, the colors, everything!

oh, very nice. i bought that same pattern for an easter dress for one of my littles!!! i don't think i'm going to get to it though. hmm...we'll see.

what a faaaabulous idea! I love what you did with the mats, especially the red one. Really creative and cute.

I think I wore my favorite album covers completely out. I remember the muppet show album was in many pieces at the end, but I was the 6th child so most of my clothes were in pieces too. This is such a wonderful idea and it turned out so well.

I absolutely adore this idea!

what a great idea! now I need to go bug my mom to see if we (she) kept my childhood records!

How clever! They look wonderful hanging up.

those look SOOOO good. i may steal your idea for more grown up albums. xoxo

Great idea and it looks perfect! Now, if you can figure our what I might be able to do with my GoGos Vacation album, let me know. It's one of the very few vinyls (with cover) that survived...

Looks great!!! You are super creative!

love this idea. i had albums and a little record player also. my favorites were Black Beauty and Peter Rabbit. I can remember listening to them over and over!
Not sure what happened to them. Wish i still had them.

I love the artwork on the Romper Room...such sweet faces

These are so cute!!! I love it. I think I'd put these in the living room, in fact.

Adorable. I just told Glen to fetch my old albums from the shop in a huge dusty box last week. I want to listen to them and look at them. I have most of my tween and teen albums but wish I had all my childrens. I have Horton hears a who, Sleeping Beauty and Dr. Doolittle. LOVED those. great memories, there is something about listening to them and staring at the one or two pictures on the album and using your imagination to fill in the rest.

I have some old children's records that I had wanted to do something decorative with too. I went and got mine last night after seeing this post, and I have the same Disney one as well as a Smurf one and The Fox and The Hound which is a colorful record rather than cover. Thanks for the great idea!

Those are so great! I love that you are using them for artwork!

I always love seeing what you are going to come up with next! Girl, you rock! :)

This is a really great idea! I would love to link to this if you didn't mind.

I love this idea! Thanks for sharing!

Those turned out lovely! I'm going to try that for sure!

OMG how awesome! I have a stash of both kids & jazz records that I love. I had been displaying the jazz records on my plate rail in the dining room but it was making them bow open. I've been pondering framing them ever since. You make such beautiful things!!

This looks amazing, great work! I just found your blog by the way. Hope the pregnancy is going well.