on the mend, it seems

Get ready for some randomness.  I hope you didn't come here for a carefully written post.

My head is still readjusting to operating in the real world, where people don't sleep for 18 hours a day and then sleep more.  Oh, and the daylight savings thing.  Can I just say how I am just not on board for that being so darned early in the year?? See, I don't really care if I get daylight until 7pm, because it's still 40 degrees outside right now.  We can't really enjoy it.  And I was really enjoying seeing the sun making her appearance nice and early there for a few weeks.  It made getting out of bed easier at 6:30 am.  Not so much right now.  It's pitch dark these days.  [OK.  /end of DST rant] 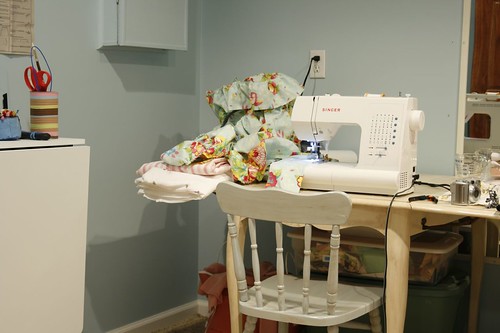 { If this room looks familiar to you, it is.  It used to be the playroom, but we made a switch right before Christmas, and put the playroom on the main level.  This makes so much more sense, as Fidget wasn't really into going into the basement by herself and playing down there, no matter how nice the room.  However, since we made the switcheroo at such a hectic time of year, everything just got thrown down there and I haven't found my groove in that room yet.  }

In other news, Fidget is sleeping the night through in her new-to-her four poster bed.  A couple weeks ago, right around her birthday, she decided to wear panties and moved into her big girl bed within days of each other.  Crazy.  Three is a big year.

Her new bed needs a duvet cover, and since I don't really want to go nuts redecorating her bedroom, I'm working with what I've got.  And you know what?  I've got a lot of vintage linens. 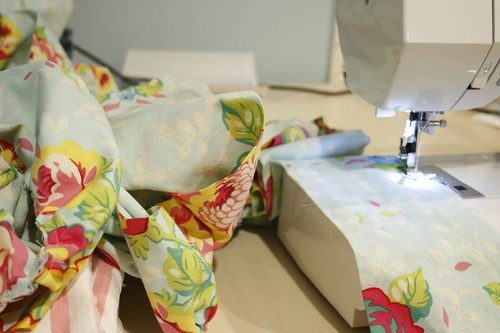 The pink and white sheet on the bottom left is going to be used for the top and I have a white sheet with a rose pattern that will work for the back.  Reversible, even...  To this, for some unknown reason, I decided what the duvet needed was the longest ruffle in the world, around three of the edges.

I decided early on that I wanted it to be folded over and gathered, so there wouldn't be an obvious top and bottom to the ruffle when the bed is a rumpled mess.  (Because it is, so often.  It's hard to work around toddler bed rails, isn't it?  Poor thing does have a history of falling out of beds, though, so they are a necessity for now.)  So the ruffle strip was like 20 yards long of double thick medium weight cotton.  Still with  me?  Who wants to hand-gather now?!!

I then decided I would try the ruffler foot that my mother gave to me a while back when she decided it didn't work on her machine.

I had no instructions, but used that link above to set it all up and get things working properly.  I was all giddy with excitement and delusional, thinking I would zip this ruffle out in three minutes and everything would genius perfection!  My husband heard a WOOOHOOOO!!! after I had done my first test ruffle.  I even showed him the result.  (He did not woohoo.)

Unfortunately, I don't think my new favorite sewing machine accessory liked the double layers of fabric.  Or me.  At 3/4 of the way through, I had bent my third needle, pulled out umpteen snags and re-aligned fabric so many times that I finally gave up.  So I now have the last couple yards to hand-gather. I'm still ahead, considering all of the work the ruffler did, however arduous that process was.  For the record, I don't think I'll be using it again for a long time. 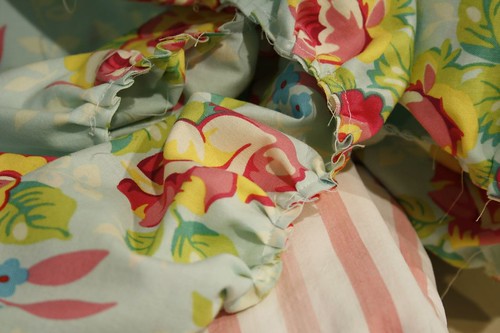 But see how pretty and even those gathers are?  I took a video of the ruffler in action, but I'm not sure of the quality.  Interested in seeing that one at all?  It really is a cool little gadget.  In theory.

Glad to see you're still alive. I was about to shoot you an email this afternoon.

I can't wait to see the finished product. Everything you make is so darned cute!

Yay for the CSA (I'm still looking for one around here) and yay for random posts. I love 'em!

I really liked my ruffler the first time I used it. The second time I tried to use it I COULD NOT make it work no matter what I did. Le sigh.

that is one of the feet I want for my machine. I love the fabric you are using.

can't wait to see how it turns out! we do a CSA here and looooovvvvveeeee it!

I'm with you on the daylight savings thing. I keep over-sleeping because the light tells me I can still be in bed, when I really can't. :(

Beautiful ruffle! I can't wait to see the duvet cover on the bed.

can not wait to see that done! beautiful fabric. vintage is my favorite!

Welcome back! Fun "new" sewing room. And sorry for your ruffling drama. UGH. I hate having to re-do ANYthing. Good luck. Can't wait to see the results!

Pretty fabric! I like your random entries. All entries actually. Fun to read!

I'm with you on daylight savings. It messes us all up over here. Love the fabric for your little ones bed. It's going to look great! Even though it was a hard road getting those ruffles in! Sometimes crafts are like child birth...it's a pain getting to the end...but then you forget all of that once it's done!

I have hand gathered the bottom tier of a ten yard skirt (the middle tier was 7), so I feel your pain.

Yea! for the CSA!

I'm with you on DST.

What beautiful fabrics! I love my ruffler foot too.

Very cute idea!! I am sure it will look soooo cute on her bed!

I'm glad to hear that you're feeling better. I can't wait to see that new room!

I wish we has a CSA in these parts... Bummer about the ruffler. Try again- it may just have been a fluke - especially since you had it working at first. Good luck!

What lovely fabric. AND congratulations on your baby. I wish you a healthy rest of your pregnancy.

thanks for the link to picnik, I have been trying to figure out how to create collages of fabric swatches for my etsy shop, and lo and behold, you can do this with picnik...yay!!!

My favorite attachment was the one that made flat fold seams that I got from my grandmother. It was great because I got to take it for show and tell in sewing class in High School. I showed the teacher and prove to her that something like that existed. I wasn't her friend after that.

I did not know there was such a thing, sounds like a fun gadget. The duvet looks lovely, can't wait to see finished. I love picnik but haven't been there in a while, I should go play a bit there this weekend. Happy Friday to you Chris, so happy your pregnancy is going smoooooth :)