Thank you, each and every one of you for the sweet congratulations on our newest little Big Project.  2008 was a strange year for me -- not the least of which was a month-long emotional drama resulting in a miscarriage last summer -- so the baby news is something that I am, shall we say, cautiously excited about.  We are 16 weeks along now, and every week I feel more confident.  Last weekend I actually pulled on some maternity jeans, so I suppose it is real now.

Anyway, you just have no idea how much your sweet words meant to me.  Really.  So thanks. 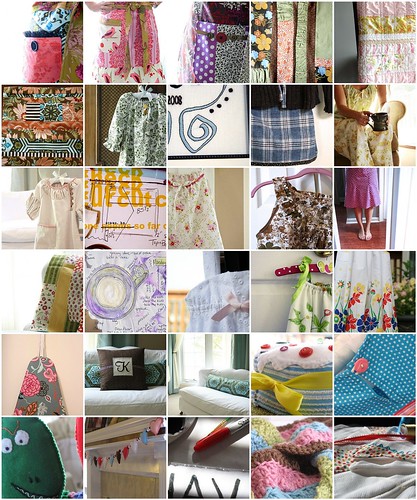 2008 was also the year I tried to crochet.  And slip-covered my little settee.  And did a lot of satin stitching.  And clothes-making.  Even for myself, which was something I had never done. I picked up watercolors for the first time since college and also made silly sashes for our annual Miss America Party.  Sarah set up a flickr pool called 'What I made in 2008" and this was just the little push I needed to look back and review.

It really was a productive year.  October, November and December seemed so light on the Making, mostly due to feeling, well, tired and queasy. I was surprised how much I got done before then, though.  (And I actually forgot to shoot a couple of things.  A couple birthday number shirts and other embroidered gifties that got wrapped and given away before I could document them.  Oops)

So, here's to 2009.  I have a quilt to finish.  Some more quilt blocks for Twelve Square.  Some more sewing for the girls.  And a nursery to arrange.  That sounds like enough to keep me busy for a while.

You are truly an inspiration! You accomplished much in 2008 and 2009 is looking very productive. Let me know your nursery colors so I can get ready for number three!

I love seeing it all together. I have some quilt blocks to do too. I'm behind. Eek!

In 2009 there are no big plans. I want to play and explore. I guess this will be the year of anti-plans ;-)

I love seeing these mosaics. If I were more adept at Flickr I'd make one, too. ;o)

Looking at your finished projects always motivates me to work on my own! Beautiful work!

So I apparently skipped the last paragraph as I was all caught up in the beauty of the aprons. CONGRATULATIONS!!!

I'm so glad I found you this year Chris. And congratulations on your exciting baby news!

An impressive 2008! Keep the projects coming. I love to see your creations.

squee! cannot wait to see pix of the nursery and your expanding waist!

Hey, I know that dinosaur!

Weeeellll, my plans for 2009 involve doing lots of staring at and sniffing of a new baby. ;) and hopefully much more knitting than 2008.

Wow! You really made a lot of wonderful things in 2008!

Hey! My security code thingy was Kazwam! I think I like that new word too! :O)

Ooh new baby coming in! Congratulations!!
You've made many beautiful things! Awesome! All the best with future crafty stuff and may the new kid and other wonderful things bring brightness to your 2009 (and many years to come)!

Congratulations to you, Chris!! How exciting!!

Oh Chris Congratulations! I read that post, I don't know how that little bit slipped by me:) What a lovely group you have to show for 2008!

i just love all of your projects. especially those sweet little dresses!
Will you show pictures of the nursery when it is done? i so hope that you do.

You made such pretty stuff this year!

i love your mosaic.