now we need a village

So.  I started this pattern over a week ago, using a linen-blend and polka dotted cotton from my stash, thinking this would be a test run. I had the dress put together over a couple of evenings.  And then all production halted because I was not going to pay RETAIL for good chunky buttons. Seriously, I wasn't going to ruin a good stash-project with $10 buttons.

Three or four thrift shops later, I found just what I needed. 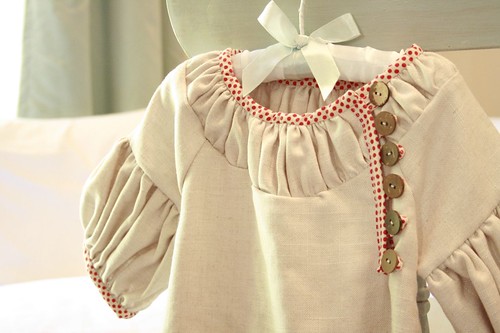 Heavens to Betsy.  This turned out just adorable.  I thought some contrast trim would punch it up a little as the linen was making it look much more like a costume than anything else, and I'm glad I had some of this around, since I didn't have enough of the linen to make the binding.  (The dots are from her quilt, which is still in production, but waiting for a little more embroidery first.)

I also decided a pocket was in order.  Little girls like to have a place for their acorns and leaves and pennies. 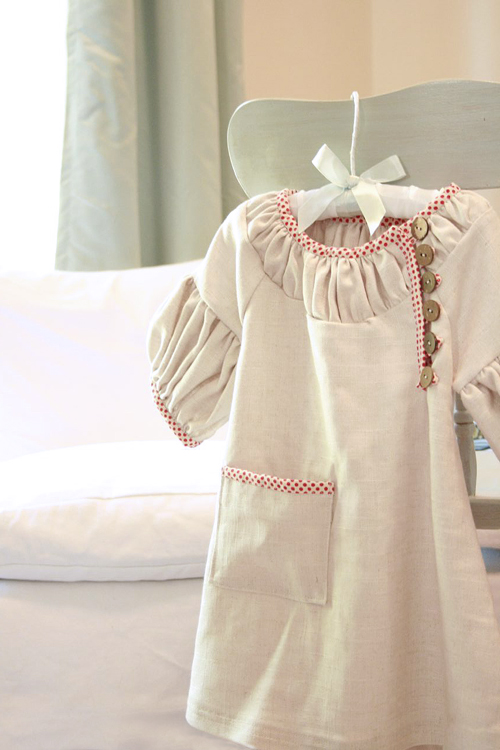 This dress is screaming for boots, don't you think?

Pattern notes: The fabric I used ended up being a bit bulky at the gathered spots and the 'blend' gives this a fairly heavy drape, so I'm honestly not sure how it will feel on.   Also, there is a bunch of gathering and this tended to fray more than most, so be warned.  If I were to use it again, I would zig-zag the edges of the gathered bits first, to reduce the fringiness and thread confusion... The directions are very easy to follow.  The sugar city gals should be applauded for this sweet design.  There are several variations, too... and I'm thinking a shirt version would be a fun quick project.  Because I need something else to do, right?

This is seriously one of the cutest dresses I've ever seen.

That turned out so cute!

Oh, my gosh! How adorable, Chris. And beautifully crafted as always. You're making me wish I had a wee one of my own to make this for. Darn kids growing up!

it turned out perfect. and the 'blend' is what my daughter's baptism dress was made of - and we've had no complaints about it - she loves wearing it.

the dots are perfect.

This is really sweet.

And aren't the price of buttons at the craft store insane? (Bias tape is equally crazy.)

Oh my...that is the cutest dress. The buttons are perfect and I think boots are a good idea...or red mary-janes.

How stinkin' adorable is this?!? I LOVE it!!! Fidget is going to look so cute in it with her golden pigtails!

Can't tell you how much I love this!! Adorable!!

That is so adorable! Makes me wished I liked to sew.

Oh, this turned out so beautiful! I agree that tights and boots are in order. Or I like the red mary janes idea, too!

That is sooooo sweet! I agree, tights and boots are in order.

i think i need that pattern.

That is seriously cute. I can't believe how even your gathers look. I might not want to shown mine when it's finished :-)

I love the contrasting binding. And the pocket! SWOON!!!!

Holy smokes that is cute! Love love it!

That dress is just so beautiful!!! It turned out so well!

Oh my goodness! This dress is amazing! I feel like sewing one right now for my little cousin! You're awesome, Miss Chris! (or would you prefer Chris?) You're simple awesome awesome awesome!!

You did such a beautiful job! I wanted to try that pattern when they get more in stock. Thanks for sharing!

That is just too cute!

That's really sweet - the dots set it off perfectly

to die for! probably the sweetest dress pattern i have ever, ever seen! i just love it!

Wow! This turned out great! It is screaming for a family photo shoot, don't you think? Oh, can you send me the jumping photos for Willie's frame!? I must cheer on the gold and black!

Chris, this is just so friggin cute. I love the simple contrast of polkie dots and beige, love love it. I can't wait to see it on the model. Superb job!

I love your version, the trim is perfect.

Yes I agree, that is seriously, hands down, probably the cutest dress ever. Little girls certainly need a pocket for treasures. Do you make those 'me' sized?
yes, boots, for sure.

I ADORE your version. The polka dot trim is the perfect detail. And I like the pocket addition too. It's so interesting to see what other people come up with. I did a long and short-sleeve version.
If you'd like to see, pictures are here:
http://dana-made-it.blogspot.com/search/label/Frocks

this is killing me!! So tell what you think the sewing level is--beginner, advanced beginner, intermediate???

That dress is gorgeous. I want to make version for me!
I have no idea how I would do it. Have you ever tried to enlarge it to fit yourself?