What a strange feeling day. 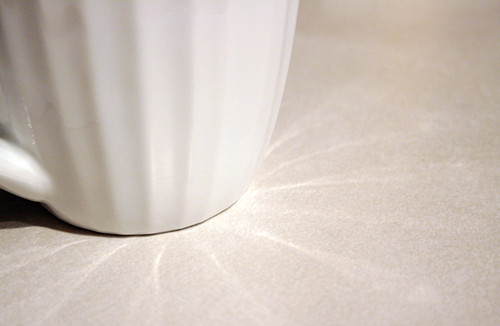 My dear friend Katie lost her grandfather last night. ( hugs, hugs, hugs, honey. ) I went over as soon as her husband called and met the third member of our little trio at her door.  We stayed up late, sitting on her deck, under a near full moon. It had risen huge and heavy, kind of orangey and fake-looking, like out of a movie.  It hung there in the sky for a bit before moving higher, growing brighter and brighter until we felt like we were sitting under a spotlight.

And then, seemingly out of nowhere, churchbells began to sound.  We have spent many, many late nights sitting on her deck, talking about life, kids, marriage, whatever, and we have never once heard churchbells.  Ever.  It was strange, but comforting.  We decided it was a sign everything was ok.

Doesn't make it any easier though. 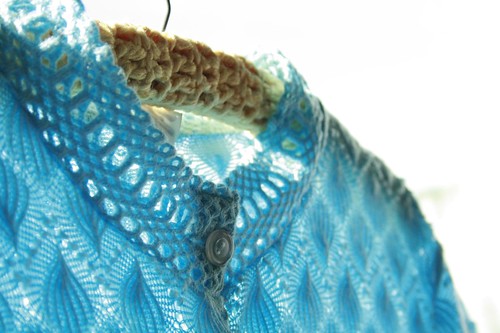 I stopped by a thrift store on my way home from errands this morning.  I was looking for an old something with big buttons I can re-use on Fidget's new dress.  Instead I found this sweet vintage sweater that reminded me of the grandmother I lost long ago before Fidget was born.  She often wore a blue cardigan.  Not like this one, but it was blue; I do remember that.  This one is too big and I don't know if I will be able to wear it. Perhaps I was just feeling sentimental, but I couldn't pass it by.

Awww sweetie. Find it where you can. Hugs.

What a beautiful sweater. Hopefully you can use it, and when you do it will be a sweet reminder of your grandma.

Hugs for your friend...

give your friend a hug from a sister in california. that sweater is gorgeous as is the photo you took of it.

Maybe a sweater hand-made by a sweet little grandma like yours. Give Katie my sympathy. It is always hard to lose a loved one even when it is all okay. Hugs!

Those things never happen by accident. Enjoy those feelings of sentiment. They are like a perfectly worn blanket to wrap in.

I feel like giving you a huge hug! No idea why but this entry makes me want to hug you! :)

Oh, my heart goes out to you! The church bells and the beautiful sweater....*sigh*

So cool, I call one of my daughters Fidget on my blog too. :D

I am new to your site and just highlighted you as 'new to me' on my own blog, today (katiescalamities.blogspot.com to make it easier for you)

So glad to meet you! Come over and check out my farm,
Katie

Sending hugs your way... Missed you!

You're such a kind friend to go comfort someone in need :-)

Thank you. I just heard that my 6 year old cousin died and I've been feeling a little lost today. I needed a little, um, I don't know if perspective is the right word, but that that's the only one coming to mind.

I'm sorry for your friend's loss.

love the cardigan.
thanks for sharing this story. I love the sound of churchbells. I hope your friend is doing okay.

What a beautiful sweater! Before I read your post...I thought that sweater reminded me of my grandma! Hope your friend is doing well.

I'm so sorry for your friend's loss. You sound like a very caring friend.

I am glad my cousin has such a sweet friend to stay up with her and to come to the funeral and give her support. I hope next time I see you it's under better circumstances.