I buy a big ol' plastic bottle of cheap-o vodka about once every two months.  Not because I drink it.  (Heavens, no.  I only drink the stuff in the pretty glass bottles, flavored with vanilla.  But I digress.) I use it on my clothes / linens / upholstery / whatever... It's wonderful.

I'm not sure where the idea began.  My sister used to mix a spray bottle of fabric softener and water and use it to spritz her furniture and carpet because she had two very large, very smelly dogs.  So I started to do that too, because I was in love with the Downy Lavender Vanilla liquid, and Febreeze didn't have anything that came close.

Then I read about Madonna ordering up a bottle of top-shelf vodka backstage for every show and having her staff spray all of her costumes with it between gigs, because it kills bacteria, evaporates, and doesn't leave a smell behind.  (I also read that anti-bacterial part in Real Simple, but it was after I had already heard the Madonna anecdote -- and Madonna makes this sooo much cooler, don't you think?) 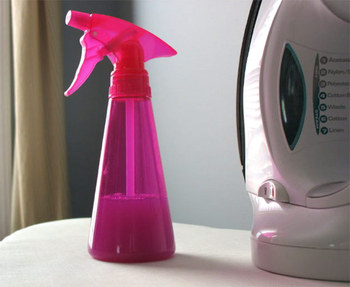 So I thought I might get the best of both worlds if I cut the vodka with some fabric softener.  And you know what?  It works like a charm.  My friend's (very young) brother came by not long ago to help move some furniture and he said I have "the prettiest smelling house (he's) ever smelled."  So now you have to believe me. LOL

USES: I spray mine on my sheets every morning before I make the bed.  On my sweaters that I haven't worn in a while.  In shoes!!! (My word, does my 11 year old have stinky feet.) Also, in luggage, etc.

I have a whole army of friends in town (and out) who have converted to my yummy vodka cocktail.  One was 6 months fully preggo when she went out and bought her huge bottle.  Got some looks, that one.

Ohh! I may have to try this. I can't get enough of the Downy Lavendar/Vanilla either. What IS it about that scent? Yum! Now my sofa can smell that way without trying to figure out how to fit it in the washing machine.
Thanks for the tip!

I'm SO using this idea! Found you through Joanne @ The Simple Wife. I'll be back!