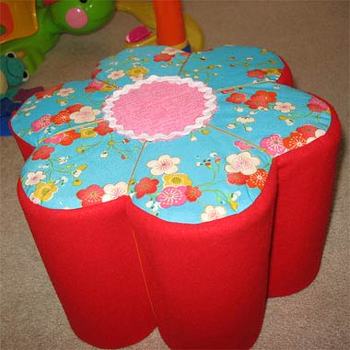 I made this stool out of empty oatmeal cans a few months ago.  Little Fidget can drag it around for a seat, or a short table, or a base for stacking things.  She loves it. This tuffet (is that what would you call it???) was my first attempt at making one, and was based on the sketchy description a girlfriend had given me a few years ago about something her grandmother used to make for her grandchildren... So it's probably 80% close to the original.  I hope.  I do have some ideas for making it better the second time around.

Perhaps a tutorial may be in store.  I'm a couple cans short of another tuffet... (ha! No kidding!)

That is really cute, and we eat lots of oatmeal.